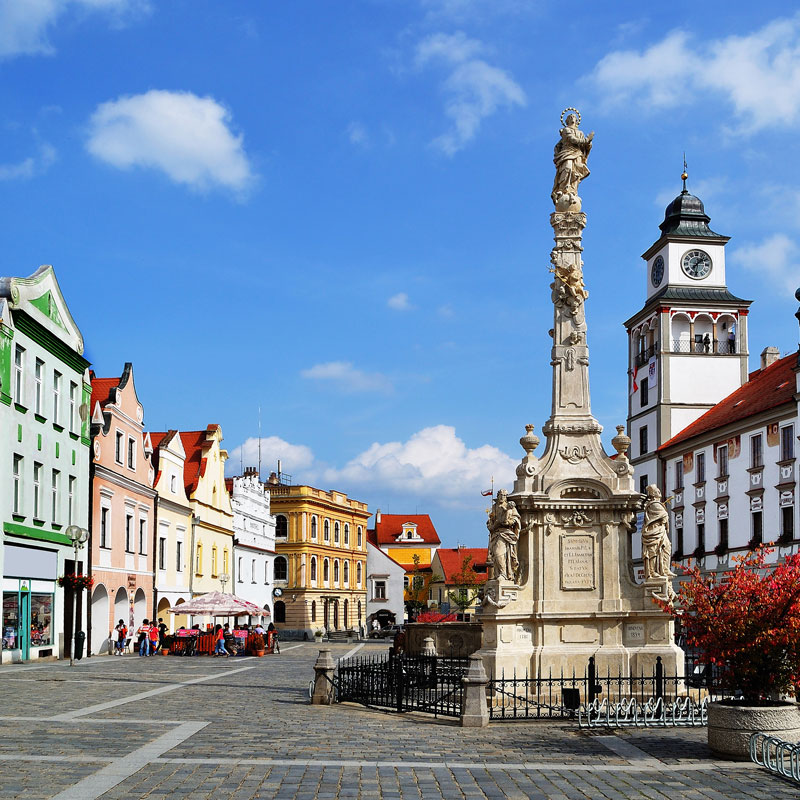 a small medieval town known for its local speciality - carp

Trebon is a small picturesque mediaeval town located in the southern part of the Czech Republic - a region called South Bohemia, not far off the border with Austria. It is an ideal stop for a lunch break, which will allow you to taste the local speciality - carp.

Local authorities have now applied to have the town (together with the surrounding mediaeval complex of man-made lakes and ponds) listed by UNESCO among the world heritage sites.nThe Trebon Plateau (Trebonska panev) covers an area of 1360 square kilometres, the central parts of which are now a Nature Protected Area. Trebon lies in the centre of this plateau.nnThe beginnings of Trebon date back to the first half of 12th century, when the first court and settlement were built here by the Wittigonens (Vitkovci). Later Trebon was controlled by the Rosenbergs (Rozmberkove in Czech). During the Hussite Wars, Trebon had a fortress, which was never defeated (now a castle). Soon, Trebon became one of the centres of culture, social life, and even alchymy for long centuries. In 17 century, the Schwarzenbergs took over Trebon. nIn 1960, Trebon won the status of a “spa” town specializing in mud therapy, and is now one of the most popular wellness and medical spa complexes in the Czech Republic.nThe whole area of Trebon Plateau was created approximately 88 million years ago in the process of creation of the Alpine Mountain Range. The Luznice river, together with suitable subsoil, created ideal conditions for building a number of lakes and ponds in the Trebon Plateau. These water areas became a magnificent project of the Rosenbergs, who used them to regulate spring floods, but also for fish industry, which became one of their major sources of income.nSince these times, local carp became the “meat of the poor”, as well as one of the major ingredients of the traditional Czech cuisine.nTrebon also hosts the only secondary fishing school in the world, which prepares experts at fishing and breeding sweet-water fish.nWe recommend to allow at least 3 hours to visit the town of Trebon itself.nYou can also visit the Regent Brewery with its stylish restaurant, the Schwarzenbergs´ Tomb in the nearby village of Domanin, the main square of T.G.Masaryk with its burghers´ town houses, and a number of other noteworthy places.

You can visit Třeboň and the surrounding lake area (Třeboňsko) on these routes: