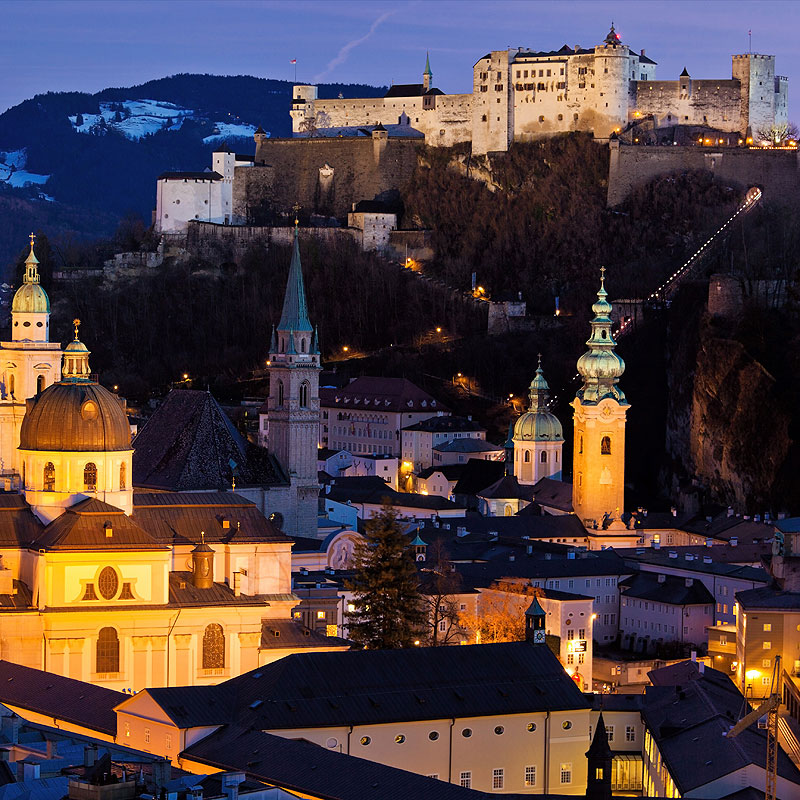 Salzburg known for its largest and fully preserved castle in Europe situated on top of one of the town´s hills called Festungsberg is the capital city of the Austrian region “Land Salzburg”, which is the border region with Germany´s Bavaria. Salzburg itself is situated almost at the border with Germany located 425 metres above the sea level. It is an ideal scenic stop-over for travellers between Munich, or Hallstatt and Linz, Cesky Krumlov, Prague, or Vienna.

This historical town of some 150 thousand inhabitants derives its name from “salt”, which has been mined in the area for centuries.nIn 1996 Salzburg was listed by UNESCO becoming a world heritage site. It is also the birthplace of Wolfgang Amadeus Mozart. nSimilarly to other historical towns, Salzburg is situated on a river (called Salzach), which has formed a number of hills Salzburg is made by - making Salzburg one of the greenest European cities.nWe recommend to allow at least 2 or 3 days to get acquainted with all the noteworthy sights in Salzburg. There are a number of points of interest, including Mozart´s birthplace, the UNESCO listed Old Town, Hohensalzburg fortress, Stift Sankt Peter (St Peter´s Cloister), Franziskanerkirche (Francis Order Church), Leopoldskron Castle, or St Rupert and Virgil Cathedral representing a wide range of architecture spanning from Romanesque, over to Gothic to Baroque.nYou can also visit the magnificent Mirabell Castle Gardens, or Hellbrunn Castle Gardens.nThere is also a number of theatres, museums, music venues, or you can visit Salzburg´s Music Festival (Salzburger Festspiele), which takes place in summer.nWe definitely recommend to allow some time to see the surrounding area, too, offering some stunning views.

You can visit Salzburg on these routes: