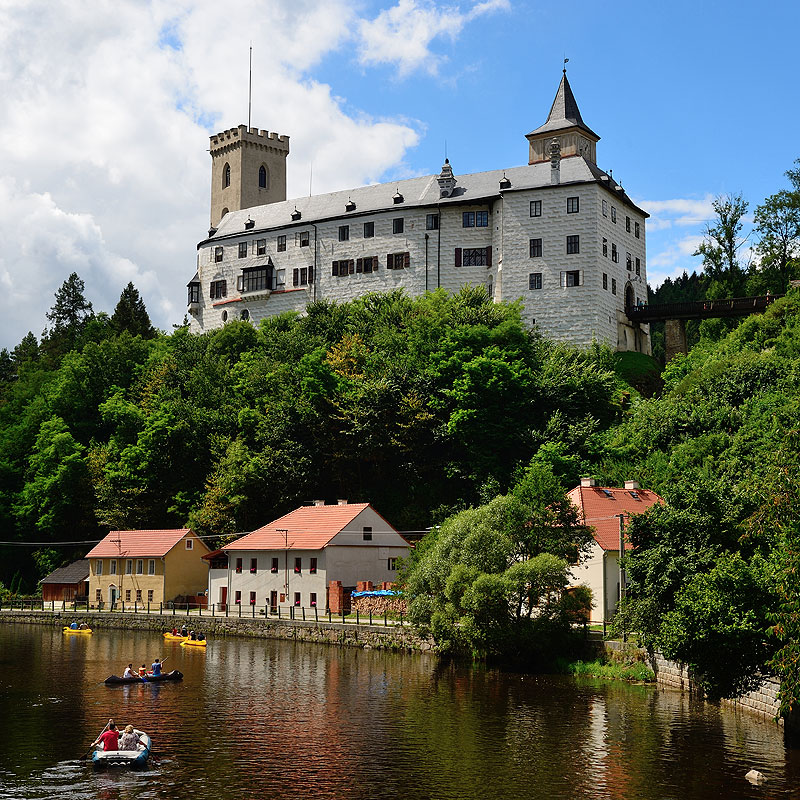 a small mediaeval town with a romantic castle

Rozmberk is a small town of over 300 inhabitants situated 23 kilometres south of Cesky Krumlov, which is approximately a 30-minute drive from Cesky Krumlov along the Vltava river (Moldau). Its location on the river Vltava made it an ideal spot to begin an early settlement. This smallest town in the Czech Republic is an ideal scenic stop-over for all travellers between Prague, or Cesky Krumlov and Linz, Salzburg, Hallstatt, even Vienna, and a number of other more distant destinations.

The biggest attraction of Rozmberk is its castle (intended to look like a miniature of the castle in Cesky Krumlov), which was built on top of a strategic hill (overlooking the river) above the town as early as 1250. The town was created shortly after that in 1262 in place of the original settlement. The castle gained today´s renaissance look during the era of the Rosenbergs (Rozmberkove in Czech) between 1302 and 1611, during whose reign the whole region (including Cesky Krumlov, Jindrichuv Hradec, Trebon, and other parts of the Rosenberg empire) marked massive development. In 1945, the castle was nationalized, and has been fully accessible to the public ever since.nRozmberk can, of course, offer other attractions, too, such as the Jewish Synagogue with the old and new cemetery, or Virgin Mary Church in the main square (a precious Gothic building), the Fountain with the Statue of Jan Nepomucky (in the main square) etc.nWe recommend to allow approximately 3 hours to visit the town, and the castle. You can also explore the place by canoe or raft along the peaceful river Vltava.nWe recommend to allow some extra time for lunch coffee, and a small stroll around the town.nThe castle is accessible all over the year (offering 2 major tours) with limited opening times in winter season (October to April). Tours are available in foreign languages, as well.

You can visit Rožmberk on these routes: