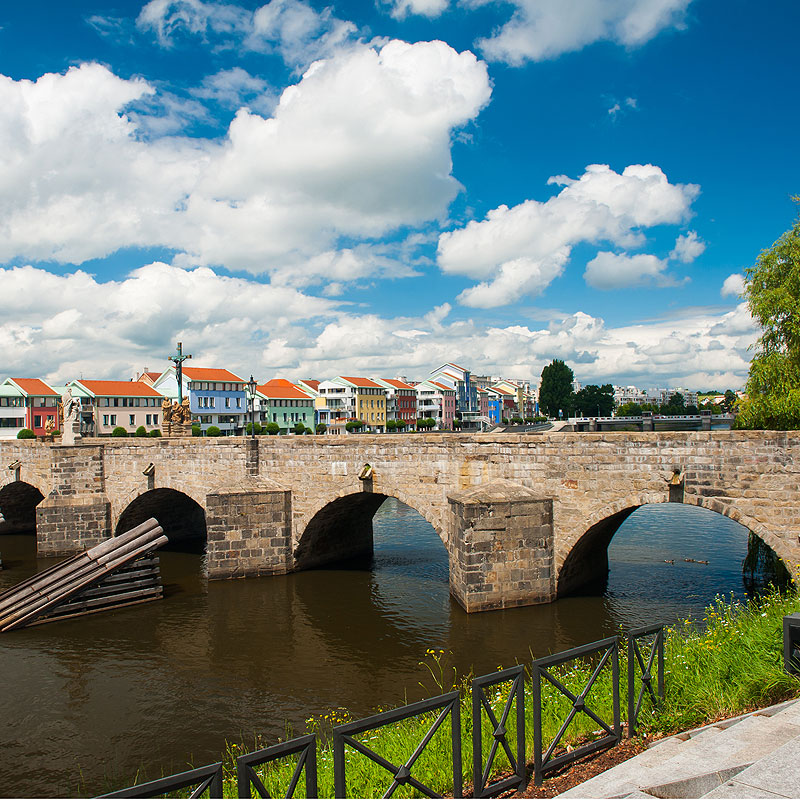 Pisek is a picturesque mediaeval town of some 30 thousand inhabitants situated nearly half-way between Cesky Krumlov and Prague in the region called South Bohemia. Like the great majority of mediaeval settlements, Pisek too is located on a river called Otava. The major attractions of Pisek include the oldest bridge in the country, the town castle, the Church of the Birth of Virgin Mary (Kostel Narozeni Panny Marie - the landmark of Pisek with a clockwork in its tower), or partly preserved town fortification walls (most of which were torn down during the industrial revolution).

It is believed that the major part of Pisek grew during the reign of the king Premysl Otakar II (Vaclav I´s son), who in 1254 pronounced it a royal fortified town with its own royal mint. During the following 2 decades most important buildings grew in the town (including the town castle, the old stone bridge, the parish church, Dominican cloister etc). Fortified Pisek also protected the Golden Trade Route, and became one of the strongholds of the royal power. Later, Pisek became one of the early communities supporting the Hussite reformist movement. Thanks to its wealth, Pisek never experienced aggressive industrial development. Nowadays, it is a modern and peaceful community. Of course, it is also an abundant source of cultural experience, and can provide plenty of enjoyable moments to lovers of history and architecture. For lovers of technology, Pisek offers tours in the oldest hydro-power station in the Czech Republic, Town Power Station, which has been producing electricity since 1887. There are a number of cyclopaths, and hiking tracks, as well as excellent facilities for lovers of rafting and canoeing (the river Otava). The town also offers a number of festivals and cultural events, as well as a Jewish quarter.

You can visit Písek on these routes: