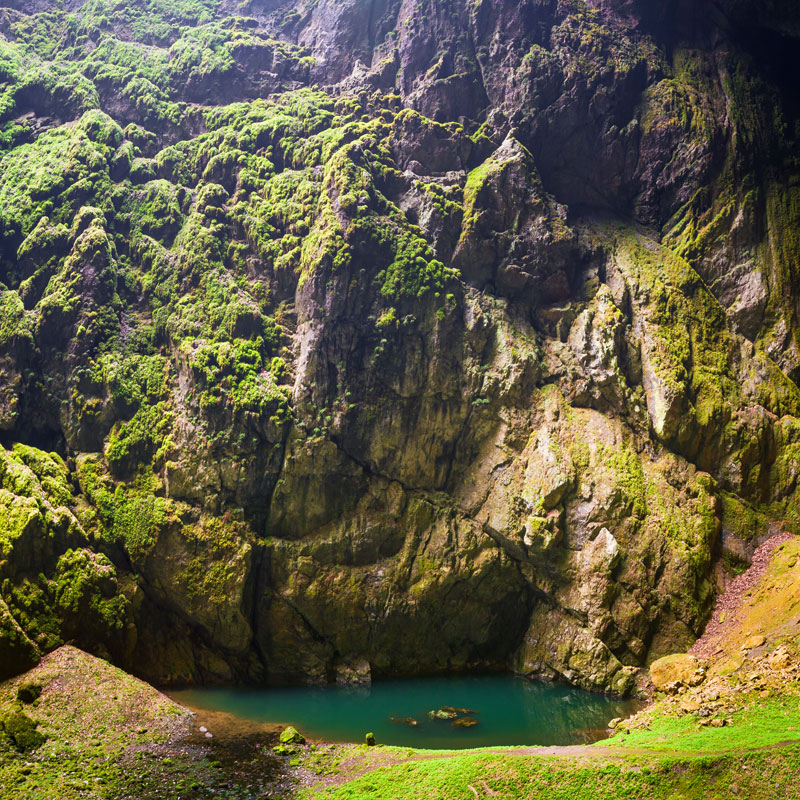 an abyss in Moravia with an underground river boat ride

The Macocha Abyss also known as the Macocha Gorge (literally: the Stepmother Abyss), is a sinkhole in the Moravian Karst cave system of the Czech Republic located north of the city of Brno. According to the legend, it was created by the fall of the cave ceiling.

The Punkva river flows through it and creates two small lakes. The lakes are very deep, one of them had not been reached to the bottom yet (it is deeper than 49 meters). The sinkhole is about 138.7 meters deep and also is the deepest of its kind (light hole type) in Central Europe. To the name of the Gorge covers the legend (by all accounts truthful), that one of local men had a son, but his wife died and he married another woman. The woman (the stepmother of the son) hated that boy so much, that she tried to throw him in the gorge. The boy saved himself and ran into the village. As punishment, the villagers threw the stepmother in the abyss. The cave system of Punkevní Jeskyně is one of the most beautiful natural sights in the Czech Republic. It offers the possibility to go to the bottom of the Macocha abyss, but you may also go on a boat trip through the caves on the underground river Punkva. The cave tour begins with a tour through several cave halls and then continues with a boat ride. There are also many other caves in the region, but the Punkevní jeskyně is one of the most beautiful ones. It is surely a natural treasure that you shouldn’t miss, if you visit the Moravian karst.

You can visit Macocha gorge on these routes: