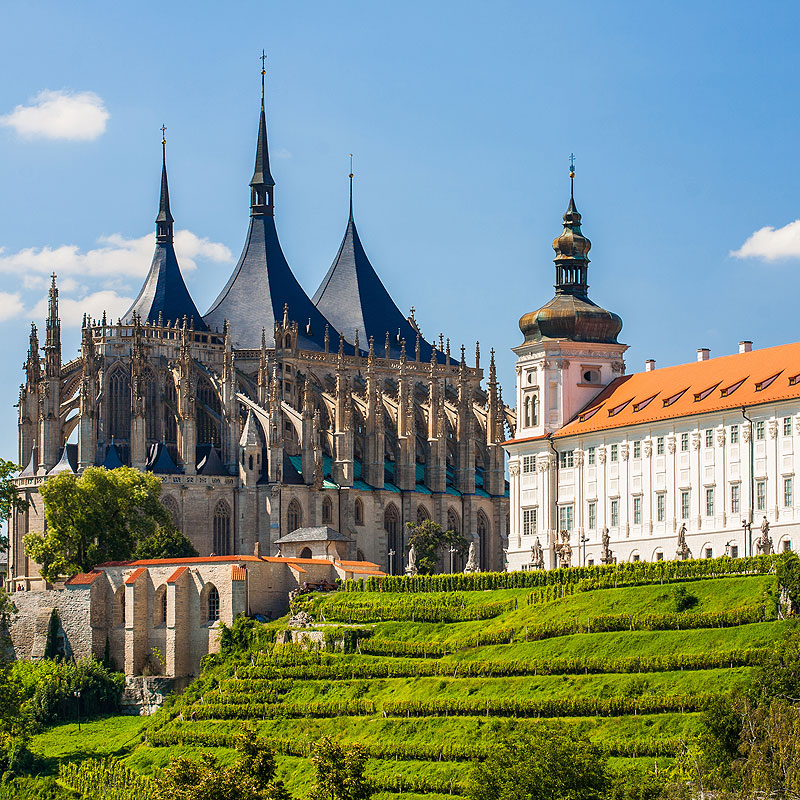 Kutna Hora is a town of some 20 thousand inhabitants listed by UNESCO among the world heritage sites in 1995 offering tens of exquisite examples of mediaeval architecture, rich cultural life, and history. It is situated approximately a 45-minute drive to the east of Prague, in the region of Central Bohemia.

In the 13th century, this region produced approximately one third of Europe´s silver. The town quickly grew on the land belonging to the Cistercian Monks, who had originally set up a cloister in the nearby settlement called Sedlec in 1142. These Cistercians were specialists at silver mining, and so they set up the first silver mines here. In 1300, the Czech king Vaclav II. (Wenceslas II) introduced a new mining law, thanks to which Kutna Hora started minting the official currency known as Prague Penny (Prazsky gros). The Silver Fever started immediately afterwards, and thousands of people flooded to the town in search of fortune. The wealth pouring from Kutna Hora became the major source of income for the Luxembourgs (Lucemburkove), who used it to built some of the most magnificent sights, and institutions in Prague as well as nationwide. In return, the town enjoyed full protection by the royal family (including Vaclav IV. and Charles IV.). In Modern Times, Kutna Hora became a refuge of Czech Revival Movement, and housed a number of national associations. Today´s Kutna Hora has a brewery, and a tobacco factory. Around 1700, the source of silver ran out, and even the later opened tin and lead mines were closed in 1991. The most important attraction of Kutna Hora, however, are its sights and mediaeval architecture, which includes the St Barbara Church (Kostel sv. Barbory), or Virgin Mary Assumption Church (Kostel Nanebevzetí Panny Marie), Archdeanery, Stone Fountain, Little Chateau (Hradek - which hosts the local Museum of Silver Mining), Vlassky Court (Vlassky dvur - the former seat of the king Vaclav IV.), the Charnel House (Kostnice) etc. The town also hosts a number of festivals connected with mining, folk culture and music, or the typical Easter Fun Fair.

You can visit Kutná Hora on these routes: