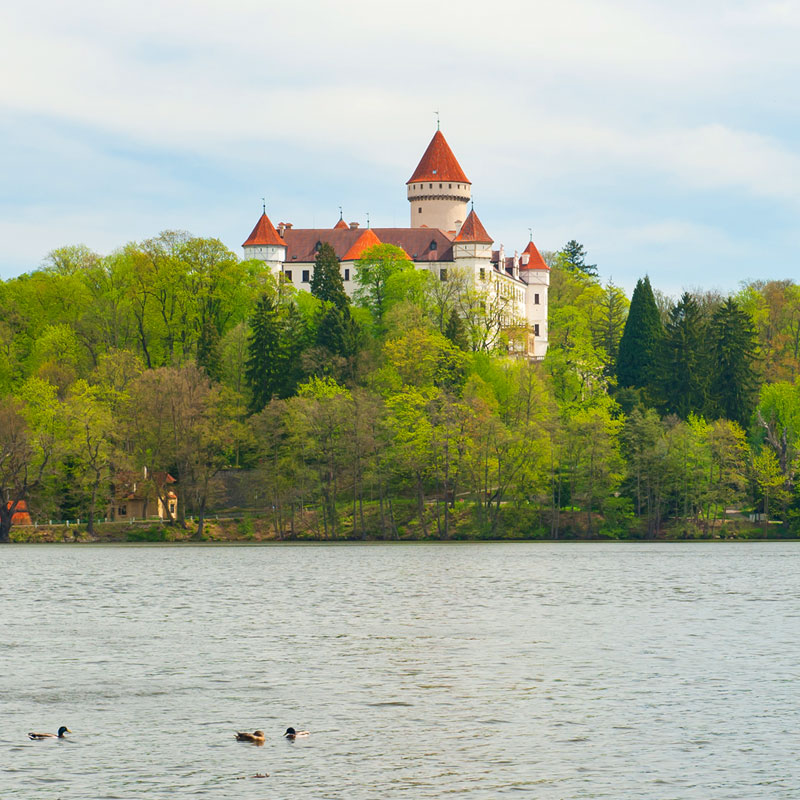 A four-winged three storey château located in the Czech Republic, about 50 km (30 mi) southeast of Prague, outside the city of Benešov. Konopiste was the main and last residence of Franz Ferdinand Habsburg-d´Este, i.e. the last heir of Austria-Hungary Empire throne. His assassination in Sarajevo in 1914 was the major cause of the First World War (WWI).

Franz had the castle modernized into a chateau installing water pipes, electricity, and even a hydraulic elevator. During the Second World War, the castle became the Headquarters of the Nazi SS units. After the war in 1945, it was made accessible to general public. The refurbishment of the 18th to 19th century turned the castle into a representative residence (chateau). The history of the chateau dates back to approximately 1294, when the original castle was founded by the family of Benesov lords (named after the nearby town). Over the centuries, the castle changed hands several times. The current Baroque to neo-Gothic look has remained in place since Franz´s death until today, including the lavish interiors. Due to its strategic position, Konopiste is best enjoyed as a part of 2 to 4-hour stop-over, during which you can visit both the interiors, and the chateau garden grounds (best enjoyed between April and November), including the magnificent rose garden green houses. You can also savour a romantic lunch within the chateau restaurant. Konopiště has been open to the public since 1971. Visitors can observe the residential rooms of Franz Ferdinand who was also an enthusiastic hunter, a large collection of antlers, the "Obizzi-Este collection" (the third largest European collection of armoury and medieval weapons from Castello del Catajo, Padua, Italy),[1] a shooting hall with moving targets and a garden with Italian Renaissance statues and greenhouses. The castle can be toured from April to October. The chateau and its garden grounds are closed for public in shoulder season (December to March). There are three different routes to choose from, each of which takes between 50 and 70 minutes - also available in English. It is also a romantic setting for numerous wedding ceremonies.

You can visit Konopiště on these routes: