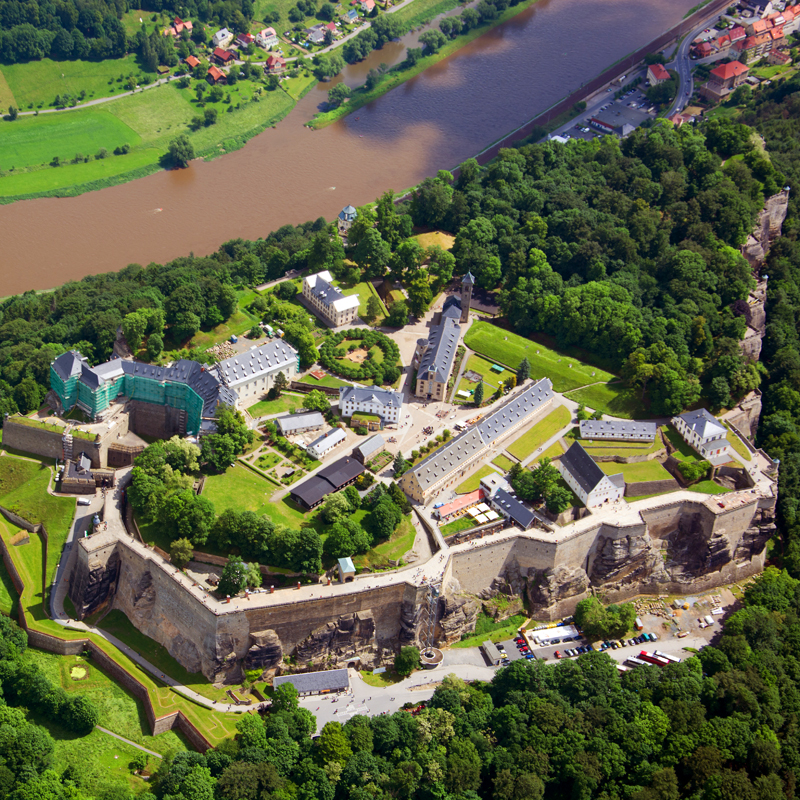 one of the most extensive mountain forts in Europe

Königstein fortress is situated in the middle of Labské Pískovce (literally: The sandstones of the Elbe) on the mesa Königstein above the same-name village on the left bank of the river Elbe. On the plateau, which is situated at an altitude of a value 240 metres above the river level, stands military historic skanzen with the expanse of 9,5 ha. Since 1955, the military skanzen is accessible to public. From the sandstone are built 1800 metres long and up to 42 metres high walls of the fortress. In the middle of the fortification is situated 152,2 metres deep well - the second deepest well in Europe.

In the 12th century, there were built buildings from stone yet. The oldest preserved building of the fortress is the castle chapel from the 12th-13th century. Probably the first written record about the Castle is on the decree from 1233 of Wenceslaus I. of Bohemia. In the Middle Ages, the castle belonged to the Bohemian Kingdom. Königstein fortress served to dukes as a safe place in the war times, as a hunter chateau or villa, but it was a state jailhouse too. It was dreaded state jailhouse since 1591, when it welcomed the first prisoner. During the Franco-Prussian War and both World Wars it was used as a war prison camp. Since 1949 to 1955, it was used as an Institute for re-education of youth convicted to punishment and for the adolescents, which didn’t prerequisites the socialist society. The fortress was used also for custody of state reserves and secret archives. The fortress is accessible to public all year long, except few days. Beyond the building itself, there are available permanent and thematic cognitive actions and tours. Tours in german, english, czech, russian, french Duration: 60 to 90 minutes Free for guided tour: € 4 for adults, children up to 16 yrs free of charge Meeting point: Well House (in front of the information office)

You can visit Königstein on these routes: