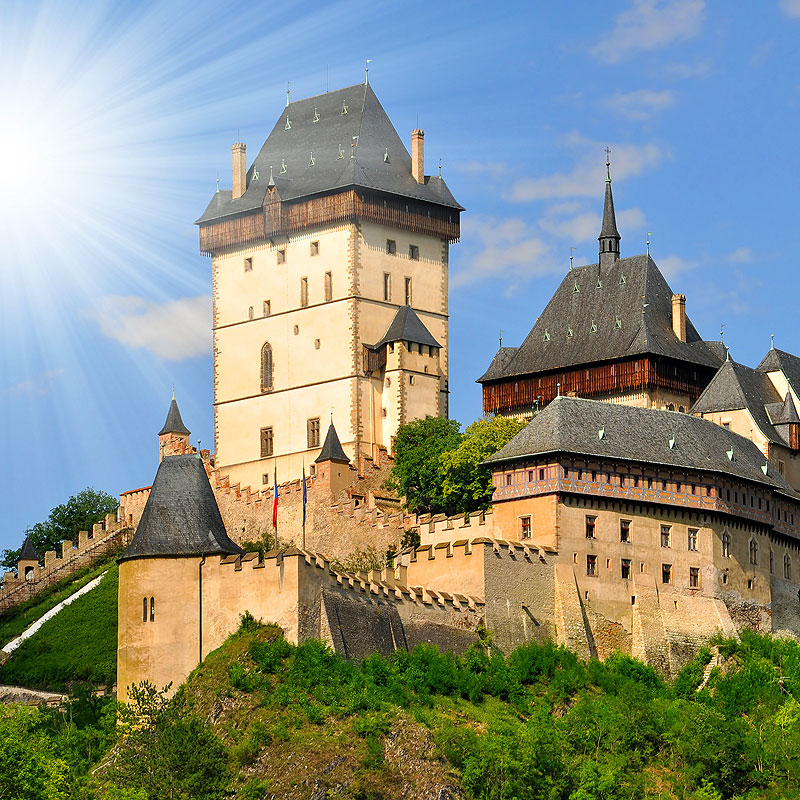 a mediaeval royal castle near Prague

Karlstejn is a mediaeval castle situated approximately 30 kilometres south-west of Prague. It is an ideal stop-over for all lovers of magnificent Gothic and Renaissance architecture, as well as nature lovers willing to explore the surrounding nature full of oak forests. In the vicinity of the castle, you can also visit caves created in the typically limestone area. It is also a place, where there is an abundance of fossilized finds from prehistoric times.

The castle´s foundation stone was laid in 1348 during the reign of one of Europe´s greatest emperors, Charles IV. Its main function was to safeguard Czech Coronation Jewels, and it also served as a private residence of Charles IV. It belongs to the most visited sights in the Czech Republic thanks to its magnificent Gothic features, although it was later rebuilt in Renaissance style. Due to its location within the Nature Protected Area of Cesky kras, we recommend to allow appr. 1 to 2 hours for your visit of Karlstejn, and its surrounding area, which offers other attractions, too, e.g. caves accessible to visitors. You can also have lunch in the village of Karlstejn, which is situated directly at the foot of the hill. Please, allow approximately 15 minutes to walk up the hill to get to the castle complex. Alternatively, horse-pulled carriage trip can cut your uphill journey short (available in the main season from April to October). The castle offers three different guided routes, in the main season (April to October). However, you can visit the castle during the shoulder season (November to March), too.

You can visit Karlštejn on these routes: