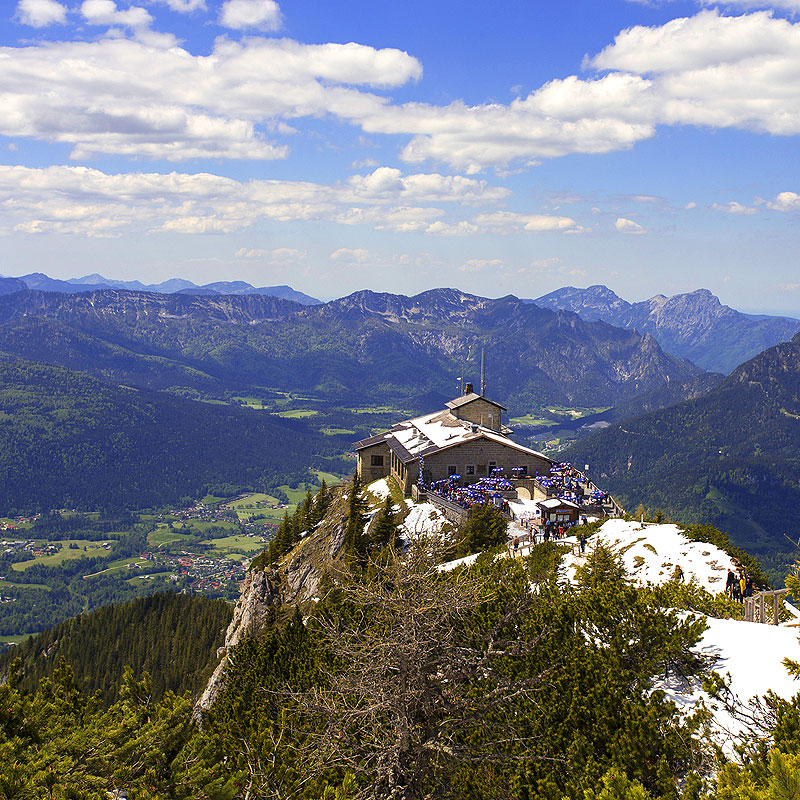 Eagle´s Nest (officially called Kehlstein Teehaus) is an unofficial name of a mountain fortress and refuge for Adolf Hitler and his closest colleagues. It is located in a dramatic mountain scenery approximately 150 kilometres south-east of Munich (Germany), and 30 kilometres south of Salzburg (Austria). It is a surface and underground complex of buildings mutually linked by underground tunnels and elevators, situated 1834 metres above the sea level on top of a mountain called Kehlstein. It is an ideal scenic stop-over for nature and mountain lovers.

Some parts of the complex were built in a village of Obersalzberg, which was taken over by the Nazis by force. Hitler used the location to create his Berghof (mountain castle), which was the lower part of the Eagle´s Nest fortress. The majority of the whole complex was skillfully hidden underground, and its top part looks like a mountain hotel, creating a perfectly deceptive impression. Personal secretary Martin Bormann gave the complex as a present to Hitler for his 50th birthday in 1937.nAs a paradox, Hitler was afraid of technical problems with the elevators within the complex, and it is reported that he visited Eagle´s Nest ten times only. The WWII winning powers (allies) nearly destroyed all parts of the complex at the foot of the mountain by bombing, leaving merely the top (i.e. the mountain hotel), which was used by Americans as a holiday resort for many more years following the Second World War.nToday, Eagle´s Nest has been turned into a modern hotel attracting ever growing numbers of visitors looking both for perfect conditions for winter sports, as well as for stunning views of the surrounding scenery.nWe recommend to allow approximately half a day to visit this charming area. You can also take a ride along a 7 kilometres long mountain scenic toll road with a number of look-out points to enjoy the picturesque Alpine scenery surrounding Eagle´s Nest.

You can visit Eagle´s Nest (Berchtesgaden) on these routes: