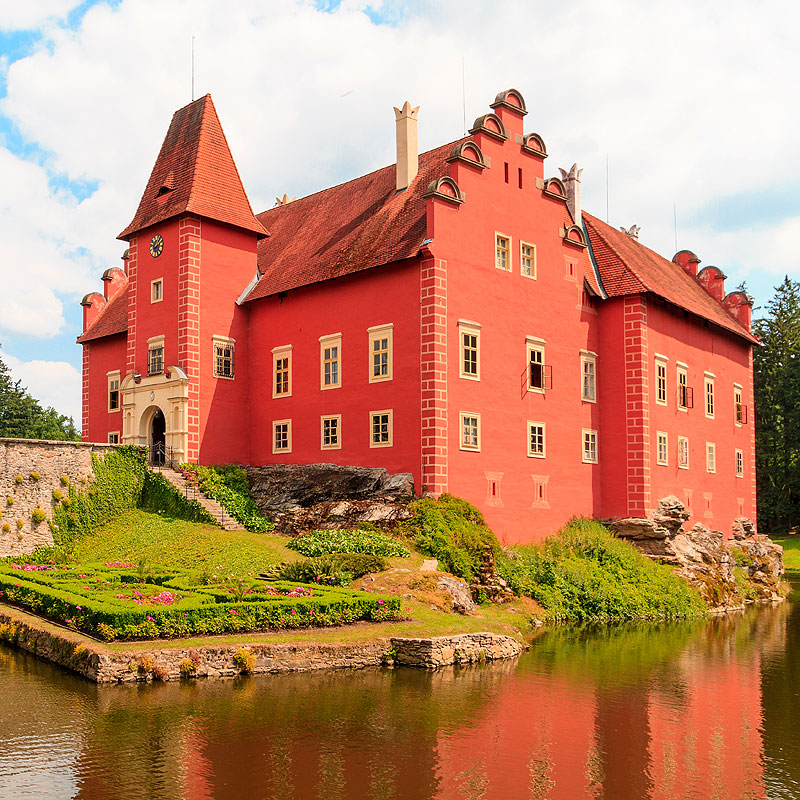 Cervena Lhota is a picturesque Renaissance chateau situated on a rock in the middle of a man-made lake among thick forests. Its location makes it one of the most romantic scenic stops in the Czech Republic

It is an ideal location for those travelling between Prague and Cesky Krumlov, Vienna, or Linz. It is also a favourite location for film makers, and has appeared in a number of filmed children stories. No wonder it is the third most visited castle in South Bohemia. The history of Cervena Lhota dates back to 14th century, when it started off as a fortress. The original gothic fortress known as Nova (new) Lhota was later rebuilt into a small Renaissance chateau. The name of Cervena (red) Lhota is based on a legend, and dates back to 17th century. According to this legend, a beautiful lady living in the chateau was taken away by a devil. Nobody has ever seen her since, the only sign of her were a few blood-red stains on the chateau´s facade, hence the red colour of the walls. Cervena Lhota is best enjoyed as a part of a 1 to 3 hour visit, during which you can enjoy the guided tour of the chateau interiors. After the tour, you can enjoy a romantic meal in the next-door restaurant. Alternatively, you can hire a rowing boat, or a bicycle, and enjoy exploring surroundings of the castle.

You can visit Červená Lhota on these routes: